Autoimmune Diseases Can be Cured: How to Get to the Bottom of the Problem

Autoimmune conditions are the conventional practitioner’s burden and the integrative and functional medicine practitioner’s gift. I say this because conventional medicine effectively addresses the symptoms, but has little to offer in the way of reversing autoimmune disease. On the other hand, autoimmune diseases are a challenge, but a surmountable challenge, given the number of tools available to integrative and functional medicine practitioners. Common areas of analysis and treatment in autoimmune conditions are: the gut microbiome, intestinal permeability, celiac disease and food sensitivities, nutrition, stealth infections, and toxicity, to name a few.

The GI-MAP is a go-to test for your patients with autoimmune disease. Unlike other stool tests, the GI-MAP provides a unique view of gut microorganisms (or “bugs”) that could initiate autoimmune conditions. An autoimmune bug by itself may not be a serious threat to immune function if your patient has a strong gut barrier. That’s why you want information about the state of the intestinal barrier. Fecal zonulin* is an add-on test when ordering the GI-MAP and can be used as an adjunctive measure of intestinal permeability. Between microbes that can prompt autoimmune processes and a marker of intestinal permeability, this stool test helps you identify some of the top gut-related triggers of autoimmunity.

Begin with the Gut

You’ve heard it a million times, so why not one more time? “All disease begins in the gut,” a wise man named Hippocrates once said. In integrative and functional medicine, we also look to the gut first, especially when there is immune dysfunction. Stool testing is therefore a first step in trying to assess patients with autoimmune conditions such as Hashimoto’s thyroiditis, rheumatoid arthritis, Crohn’s disease, ulcerative colitis, multiple sclerosis, Parkinson’s disease, or lupus. If a patient with one or more of these conditions has a gut pathogen, microbial imbalance, poor digestion, gluten reactivity, or inflammation, then treatment is advisable. It can turn their health around and give them hope for the first time in years, or even decades.

The GI-MAP helps you zoom in on specific microbes that might be “confusing” the immune system. The stool test specifically measures potential autoimmune triggers, including Klebsiella pneumoniae, Mycobacterium avium subsp. paratuberculosis (MAP), cytomegalovirus (CMV), and Epstein-Barr Virus (EBV), among others (see Table 1 for a complete list). While the evidence supporting the role of these bugs in autoimmunity is not conclusive, it is suggestive. And since integrative and functional medicine practitioners would rather not wait 20 years until it is finally incorporated into routine medical practice, it is worth knowing about right now and it might be worth addressing in your patients suffering with autoimmunity.

Generally, the detection of these microbes in the stool is not by itself reason for alarm. Conventional medical sources would say they are normal in stool and don’t require treatment. They are thought to be harmless to the immunocompetent host and “contained” in the gut. However, we have a different viewpoint in integrative and functional medicine. In susceptible individuals who have moderate to high levels of these microbes, and certainly in a patient with an ongoing autoimmune process, these microbes might be a contributing factor. If the patient also has leaky gut, this adds to the potential for these microbes to cause extraintestinal infections or to kickstart an aberrant systemic immune response. Treatments to directly shift dysbiosis of autoimmune bugs include antimicrobial herbal formulas, high dose probiotics, and a diet that is conducive to a healthy microbiome (low-sugar, plant-based, and high-fiber diet, if tolerated by the patient). See more treatment recommendations in the GI-MAP interpretive guide.

Dysbiosis of potentially autoimmune microbes together with high fecal zonulin* is a telltale pattern for an autoimmune process. When zonulin is high, it’s a sign that the tight junctions in the gut epithelium are wide open.2 If a patient has microbial dysbiosis with a high zonulin, it takes gut dysbiosis to a whole other level- a systemic level. Without that healthy gut barrier, microbes from the gut can get into the bloodstream where they don’t belong. Now you have a situation where dysbiotic microbes, large food molecules, and inflammatory signals can penetrate the intestinal lining and gain access to the whole body. It’s bad news for the patient and could be the beginning of an autoimmune downward spiral.

This conjures up the theory of autoimmune pathogenesis that was so elegantly described by Alessio Fasano in his publications on zonulin, celiac disease, and intestinal permeability. Genetically susceptible people encounter an environmental trigger (wheat in his example, or an autoimmune microbe in my example) and if they develop intestinal permeability (or “leaky gut”), it sets off a domino effect which leads to immune dysregulation and even mistaken attack of self proteins.3  It is humbling to see the litany of autoimmune diseases that follow in the wake of celiac disease, which is the textbook case example of this phenomenon.2,4,5

Microbes as a Trigger of Autoimmunity

It has long been known that microbes from the gut or genito-urinary tract can initiate autoimmune disease. One example is reactive arthritis which can be brought on by genito-urinary infections with Proteus miribalis or Chlamydia6,7 or gastrointestinal infections with Salmonella, Shigella, Campylobacter, Yersinia,8,9 and Clostridium difficile. Parasites such as Strongyloides stercoralis, Giardia lamblia, Ascaris lumbricoides, and Cryptosporidium species can also lead to reactive arthritis.10,11  Reactive arthritis patients may display noninfectious urethritis, arthritis, and conjunctivitis a few weeks after a gastrointestinal infection. But symptoms affecting other systems are also common: musculoskeletal, skin and nails, eyes, genitourinary, gastrointestinal, and more.12

EBV has a central role in the pathogenesis of systemic autoimmune diseases, specifically rheumatoid arthritis, systemic lupus erythematosus, and Sjogren’s syndrome.18 EBV has been suggested to increase the risk of developing multiple sclerosis17 and it might be a contributory factor in autoimmune thyroid disorders.19

Don’t Leave Home Without It

When you are confronting a challenging autoimmune condition, you want to be armed with a stool test that is not only sensitive and specific, but one that targets clinically relevant microbes. The GI-MAP helps you zoom in on microbes that may trigger or perpetuate autoimmune diseases. Since the gut is a strategic first place to look for immune dysregulation, a stool test that measures microbes that can trigger autoimmunity, together with gut permeability markers, is an essential in your clinical tool bag.

*A recent publication1 has called into question the specificity of a commercially available assay for zonulin (or pre-haptoglobulin2). Instead, the Immunodiagnostik ELISA assay could be detecting related proteins from the “zonulin family.” Research findings showing increased zonulin by way of this assay should therefore be interpreted accordingly. Further studies are needed.

Cass Nelson-Dooley, MS, is a researcher, author, educator, and laboratory consultant. She studied medicinal plants in the rain forests of Panama as a Fulbright Scholar and then launched a career in science and natural medicine. Early on, she studied ethnobotany, ethnopharmacology, and drug discovery at the University of Georgia and AptoTec, Inc. She joined innovators at Metametrix Clinical Laboratory as a medical education consultant helping clinicians use integrative and functional laboratory results in clinical practice. She owns Health First Consulting, LLC, a medical communications company with the mission to improve human health using the written word. Ms. Nelson-Dooley is an oral microbiome expert and author of Heal Your Oral Microbiome. She was a contributing author in Laboratory Evaluations for Integrative and Functional Medicine and Case Studies in Integrative and Functional Medicine. She has published case studies, book chapters, and journal articles about the oral microbiome, natural medicine, nutrition, laboratory testing, obesity, and osteoporosis. 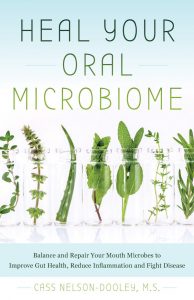 Clinicians, if the gut microbiome is a mainstay in your practice, the oral microbiome should be, too. Poor oral health could be the stumbling block holding back your patients from optimum wellness. Consider recommending my book, Heal Your Oral Microbiome, to your patients.

Consumers, put inflammation in its place when you read and follow the tips in my book, Heal Your Oral Microbiome. Supporting your oral health can improve heart disease, gut health, and joint pain, to name a few.

With over 700 species, the mouth is the second most biodiverse community of microbes in the body. In this book, we will explore the magnificent oral microbiome and how keeping it in balance can promote health from head to toe. We will review the evidence about oral health and natural, safe things you can do to optimize your oral microbiome. It may be the single most important thing you can do to protect yourself from disease.

Purchase your signed copy here.The book is also available on Amazon and from other major book retailers.