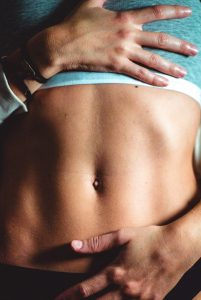 One of the most interesting things about the good bacteria in our bodies is that they make the vitamins we need to survive. Forty to sixty percent of the human gut microbiome makes B vitamins, says a 2015 genomic study of 256 gut bacteria. Even better, gut bacteria make the active forms of some B vitamins such as tetrahydrofolate (folate) and P5P (vitamin B6), which the body can use quickly and easily.

We can’t make B vitamins by ourselves, yet we’ll die without them. It’s the same thing for other mammals. Even though B vitamins are common in food, they are destroyed easily during the cooking process. We don’t store them in our bodies, so we need a constant supply of B vitamins to stay healthy.

Photo by Jannes Jacobs on Unsplash

Enter our gut microbiota. We have coevolved with our friendly bacteria to get our nutritional needs met, especially in times of starvation or poor nutrition. And before you start thinking that bacteria are charitable, they also make B vitamins for their neighbors, who consume them. 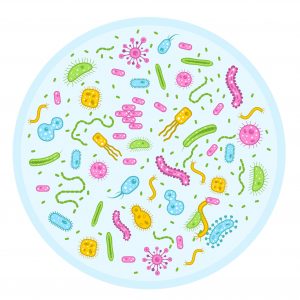 A variety of bacteria under the microscope. Abstract vector created by macrovector – www.freepik.com

Without enough B vitamins, we feel tired, weak, anemic, our metabolism suffers, and we can’t detoxify our bodies. If we are low in folate, we can’t make red blood cells. We can’t turn on or off genes that are vital to health or disease. If we aren’t getting enough P5P, we can’t break down protein or make energy. Our mood suffers and we can’t think clearly. Without enough vitamin K, our bones become weak and brittle. We might develop calcium deposits in our arteries, blocking healthy blood flow.

Researchers have long known that gut microbiota make vitamins essential to human health, but little was known about precisely which bacteria produce which vitamins. Genomic research on the human microbiome is changing that.

Thiamin is necessary for breaking down food and turning it into energy. It’s important for keeping a healthy weight, sharp memory, good mood, strong muscles, and a healthy heart.3

Riboflavin is a cofactor in numerous chemical reactions in the body and participates in energy production.3 It is needed for a healthy throat, mouth, skin, and it prevents anemia.

Riboflavin is the second most commonly synthesized vitamin of the human gut microbiota.2 All Bacteroidetes and Fusobacteria have the genes to produce riboflavin.2 Ninety-two percent of Proteobacteria can synthesize riboflavin.2 Major bacterial producers of riboflavin are Bacillus subtilis and Escherichia coli.1 Other riboflavin producers are: B. fragilis, B. thetaiotaomicron, B. vulgatus, Clostridum difficile, Helicobacter pylori, K. pneumoniae, and Salmonella enterica subsp. enterica.2 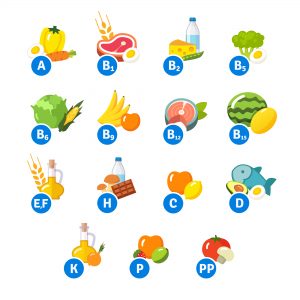 Niacin participates in many chemical reactions throughout the body and is especially important in making energy, making fatty acids, and making hormones. It improves gut health, mood, energy levels, and memory.3

Niacin is the most commonly synthesized vitamin of the human gut microbiota. The majority of gut bacteria can make niacin, especially Bacteroidetes, Fusobacteria, and Proteobacteria. You may be able to get 27% of your niacin needs met by your good bacteria.2

Lactobacilli bacteria have been shown to make niacin and vitamin B6 in yogurt, cheese, and fermented products.1 B. fragilis, B. thetaiotaomicron, B. vulgatus, Clostridum difficile, E. coli, Helicobacter pylori, K. pneumoniae, Listeria monocytogenes, and Salmonella enterica subsp. enterica produce niacin.2 There are an estimated 1.12 million molecules of niacin in a single E. coli cell.2

Vitamin B6 is critical for breaking down and metabolizing every bit of protein you eat. It’s an energy booster and improves mood and brain function since it promotes the production of neurotransmitters.

Human gut bacteria may contribute a whopping 86% of your daily vitamin B6 needs! The majority of Actinobacteria, Bacteroidetes, and Proteobacteria have the ability to synthesize pyridoxal 5’-phosphate, the active form of vitamin B6. Lactobacilli in fermented foods manufacture vitamin B6.1  B. fragilis, B. thetaiotaomicron, B. vulgatus, E. coli, K. pneumoniae, L. monocytogenes, and Salmonella enterica subsp. enterica produce vitamin B6.2

Pantothenic acid is a component of coenzyme A, which helps the body make fatty acids. Coenzyme A is essential for life. It helps to make energy from carbs, protein, and fats, folate derivatives, hormones,  vitamins A, D, and heme.5 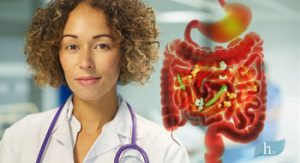 Folate is a hugely important vitamin. It is involved in a chemical process called methylation which provides the building blocks for making DNA, turning genes on or off, making good mood chemicals, and getting rid of toxins. Its critical role in human biochemistry explains why food was fortified with folate: because low levels can lead to birth defects,7 infertility, heart disease, and mood disorders.

However, recent genetic research shows that 13% of 512 human gut bacteria can make folate from scratch (or de novo synthesis).8 Lactobacillus reuteri and E. coli Nissle make folate (49-77 ng/uL). Akkermansia muciniphila, Clostridium sporogenes, and Prevotella copri also make folate.8 An additional 39% of the 512 human gut species can make folate as long as they have access to a precursor, pABA (para-aminobenzoic acid). Experts advise that L. reuteri should be given together with pABA to maximize its folate producing potential. Lactobacillus casei contains 22 uM of folate derivatives in each cell.2 Other folate producers are: B. fragilis, B. thetaiotaomicron, B. vulgatus, Clostridum difficile, E. coli, Helicobacter pylori, K. pneumoniae, Lactobacillus plantarum, L. monocytogenes, and Salmonella enterica subsp. enterica.2

Nearly all Bacteroidetes bacteria can produce folate.2 71% of Proteobacteria, 15% of Firmicutes, 26% of Actinobacteria, and 79% of Fusobacteria in the human gut are able to create folate de novo. From bacteria alone, you may be able to get 37% of your folate needs met. And remember, bacteria make the best form of folate- tetrahydrofolate- the active form that your body can use easily and quickly.8

“The microbiome serves as an important folate-generating ‘organ,’” authors said.8

Vitamin B12 is essential for cellular energy and DNA synthesis. It cooperates with folate in methylation and is similarly critical to optimum health. Vitamin B12 supports healthy pregnancies, positive mood, heart health, bone strength, and vision.9

Propionibacterium freudenreichii, found in Swiss-type cheeses, was one of the first organisms known to biosynthesize vitamin B12. It is also used in the commercial production of vitamin B12.1 Lactobacillus reuteri CRL 1098 can make vitamin B12,1 to the tune of 50 ug/L vitamin B12 in each cell.2 Because Propionibacterium and Lactobacillus reuteri live in the human intestine, authors suggest that they may partially fulfill human vitamin B12 needs.1 Other gut bacteria that produce B12 are: B. thetaiotaomicron, Clostridum difficile, K. pneumoniae, L. monocytogenes, and Salmonella enterica subsp. enterica.2

Pseudomonas dentrificans, Rhodobacter capusulatus, Rhodobacter sphaeroides, and Sinorhizobium meliloti make cobalamin de novo. Salmonella typhimurium, Bacillus megaterium, Propionibacterium shermanii, and Escherichia coli make vitamin B12. Large scale industrial production of vitamin B12 uses Pseudomonas denitrificans, Propionibacterium shermanii, or Sinorhizobium meliloti. Thermotoga thermarum, Thermatoga lettingae, Fervidobacterium nodosum, and Thermosipho melanesiensis, Thermosipho africanus, Kosmotoga olearia, and Petrotoga mobilis also make cobalamin.10 Some or all of the bacteria in this paragraph and the one before it may not live in the human gut, as they were listed in a paper that also discussed commercial production of vitamin B12. 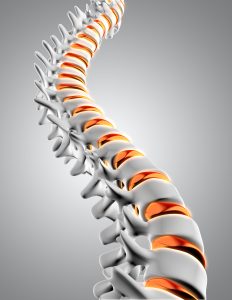 Gut bacteria are believed to generate somewhere between 10 – 50% of your daily vitamin K needs. We still don’t know a lot about the vitamin K2 producers in the human microbiome.11 However, we do know that Escherichia coli, Mycobacterium phlei, and Bacillus subtilis make menaquinones, as they were the subject of extensive research.12 As of a 1995 publication, few human commensal microbes were believed to be major producers of vitamin K2. However, other research says the obligate anaerobes in the Bacteroides fragilis, Eubacterium, Propionibacterium, and Arachnia groups are menaquinone producers. Bacillus brevis and Bacillus cereus make menaquinone. Bacillus natto is responsible for high levels of MK-7 in the soybean fermentation product, natto.13

Other bacteria that make biotin include:14

The Biosynthesis of “B Complex” by Gut Bacteria

Some human gut bacteria make not only one B vitamin but a “B complex.” Bacteria from the Bifidobacteriaceae family are more likely to make niacin, vitamin B6, and thiamin. Of the Bacteroidetes phylum, 51% were able to produce all eight B vitamins. Several Proteobacteria can also make all eight B vitamins. Conversely, bacteria from the Firmicutes phylum were not able to biosynthesize any B vitamins!2 It’s interesting that a high Firmicutes to Bacteroidetes ratio has been linked to metabolic syndrome and obesity.15 Higher Bacteroidetes phylum may not only indicate a healthier microbiome, a leaner body, but also higher levels of vitamin production.

We Still Need Vitamins from Food and Supplements 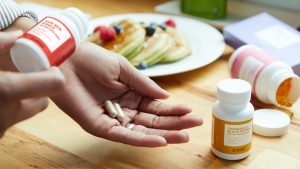 Even though healthy gut bacteria contribute to vitamin levels, we cannot rely on them to meet all of our vitamin needs. A major reason we can’t count on them is because the rest of the microbiome uses these vitamins, too. Based on calculations, your good gut bacteria make only four vitamins in sufficient amounts to supply at least ¼ of your daily B vitamin needs – vitamin B12, folate, niacin, and vitamin B6.2 That means you still need to eat a healthy diet and take your vitamins. But if you take antibiotics, you will need to boost your diet and supplements because your microbiota-derived vitamins will take a nosedive.

Action Steps: Boost Your Nutrition by Maximizing Your Gut Microbiome